Silicon Valley legend and high-tech marketing pioneer Regis McKenna joins Tim for a complete hour to talk about his path to become one of the foremost marketing thinkers in the tech era. Regis is most widely known for his work with Apple from the very beginning, and for helping to grow Intel and Genentech.  In this wide-ranging conversation, Regis talks Apple, Steve Jobs, marketing and the future, and in the process he puts on a Marketing Masterclass. 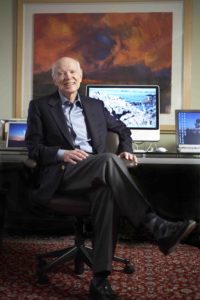 Regis McKenna founded his own high tech marketing firm, Regis McKenna, Inc., in Silicon Valley in 1970 after working in the marketing departments of two early semiconductor-pioneering companies. His firm evolved from one focused on high tech start ups to a broad based marketing strategy firm servicing international clients in many different industries and countries. McKenna retired from consulting in 2000 and is concentrating his efforts on high tech entrepreneurial seed-ventures.

McKenna is included in the San Jose Mercury News’ Millennium 100 as one of the 100 people who made Silicon Valley what it is today. McKenna has written and lectured extensively on the social and market effects of technological change advancing innovations in marketing theories and practices.

McKenna and his firm worked with a number of entrepreneurial start-ups during their formation years including: America Online, Apple, Compaq, Electronic Arts, Genentech, Intel, Linear Technology, Lotus, Microsoft, National Semiconductor, Silicon Graphics, 3COM, and many others. McKenna helped launch some of the most important technological innovations of the last thirty years including the first microprocessor (Intel Corporation), the first personal computer (Apple Computer), the first recombinant DNA genetically engineered product (Genentech, Inc.), and the first retail computer store (The Byte Shop). In the last decade, McKenna consulted on strategic marketing and business issues to industrial, consumer, transportation, healthcare, and financial firms in the United States, Japan, and Europe. McKenna continues to be involved in high tech start-up companies through his venture activities.

McKenna pioneered many of the theories and practices of technology marketing that have become integrated into the marketing mainstream. Some of these include:

McKenna has written five books on technology business strategies and marketing. His first two books were: The Regis Touch and Who’s Afraid of Big Blue. His third book, Relationship Marketing, published in 1992, focuses on the interactive relationships vital to market acceptance in the “Age of the Customer.” Real Time, Preparing For The Age Of The Never Satisfied Customer, was published by Harvard Business Books in 1997. This book analyzes the effects of technology on the marketplace and describes how high-speed electronics enables ready access to information, products and services and in the process, generates increased expectations for immediate satisfaction.

His book, Total Access: Giving Customers What They Want in an Anytime, Anywhere World, published by Harvard Business School Press in March 2002, addresses the future of marketing as computers and the network do most of the work, from data gathering to customer care and response. The marketing function disappears into a network of relationships and responsibilities between man and machine throughout the value chain. Total consumer access to-and interaction with-the marketplace replaces the archaic broadcast model.

McKenna has appeared on the television NightLine special on Time, The Jim Leher Report on technology at the Millennium and on The Today Show on venture capital.

Born and raised in Pittsburgh, Pennsylvania, McKenna attended Saint Vincent College and is a liberal arts graduate of Duquesne University. In 1962, he moved to Silicon Valley. In 1965, he joined the marketing department of General Micro Electronics, the first company to develop and market commercial MOS (metal oxide semiconductor) products, the basis for much of today’s electronics technology. He joined another start-up, National Semiconductor, in 1967 where, as Marketing Services Manager, he helped direct National’s marketing strategies in the early stages of the company’s growth.