Encore: The Christmas Truce of 1914

Historian and author Terri Crocker joins Tim to talk about the still remarkable Christmas Truce of 1914 at the outset of the First World War. Terri wrote the book, “The Christmas Truce: Myth, memory and the First World War.” In this episode, we look at the Western Front where against all odds and their commanding officers, German and British troops, and others stepped out into no man’s land on Christmas Day for a day of peace. This episode was originally released on December 23, 2019. 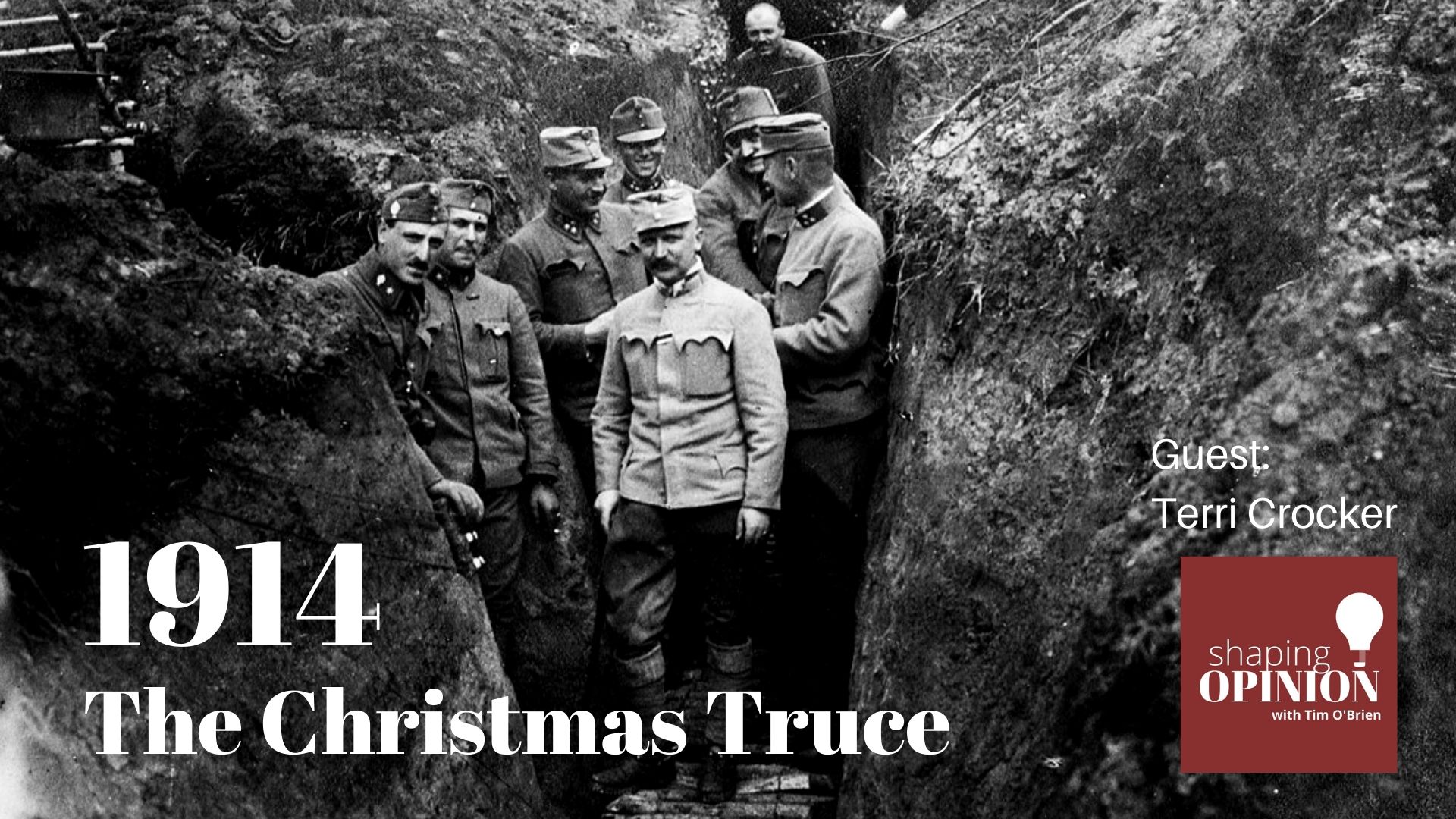 It was the first Christmas since the start of the First World War in 1914. The bloodshed had already been enormous.

The front lines of the war along the Western Front were close enough to hear what was happening in the trenches on the other side. In between was known as no man’s land, where nothing could survive the steady sniping and bombardment between the armies.

The trenches were cold, muddy and wet, and sometimes, cold, frozen and wet. The troops on both sides thought the war would be over by Christmas, and here it was Christmas Eve.

Silence, and then as Terri Crocker tells it, the sound of music would break the silence.

A young farmer’s son in the Queen’s Westminster regiment by the name of Edgar Aplin starts to sing. He’s apparently a good tenor, and he sings the song Tommy Lad.

After a few verses, he hears a voice from the German trenches shout, “Sing it again Englander. Sing Tommy Lad again.”

So, Edgar sings the song again, and then events started to unfold.  Private Aplin would send letters to his relatives and there is documentary evidence of this.

“We had been out of the trenches for four days’ rest, and returned on the 23rd of December, to relieve some regular troops. On Christmas Eve, the usual war methods went on all day, sniping, etc., until evening, when we started a few carols and the old home songs.”

Immediately, our pals over the way began to cheer, and eventually we got shouting across to the Germans. Those opposite our front can mostly speak English.

“Soon after dark, we suggested that if they would send one man halfway between the trenches (300 yards), we would do the same, and both agreed not to fire.

“So, advancing towards each other, each carrying a torch, when they met, they exchanged cigarettes and lit up. Cheering on both sides was tremendous, and I shall never forget it. After a little while, several others went out, and a pal of mine met an officer who said that if we did not shoot for 48 hours, they wouldn’t. And they were good as their word, too. On Christmas Day, we were nearly all out of the trenches. It was almost impossible to describe the day as it appeared to us here and I can tell you, we all enjoyed the peaceful time.”

The family had said that Private Aplin would survive the war. He was sounded in the legs in March 1915 and went back to Britain where he recovered and would train new officers.

After the war, he was a “milk man” and owned some “tea rooms.”

The Cause of War

World War I began in 1914 after the assassination of Archduke Franz Ferdinand and lasted until 1918.

During the war, Germany, Austria-Hungary, Bulgaria and the Ottoman Empire (the Central Powers) faced off against Great Britain, France, Russia, Italy, Romania, Japan and the United States (the Allied Powers).

The sides had negotiated cease fires for body retrieval for burial. But during the day, soldiers were ordered “over the top” for charges. Their bodies were left stranded in “no-man’s land.”

In the dark, both sides would send other soldiers out to retrieve the fallen. Sometimes, soldiers would intentionally hold fire.

After dark, food would be delivered to the troops on both sides and they would actually cease fire during meal times.

British officers would sometimes report that during these periods, they could see German soldiers walking about within range behind their own line, and British soldiers had not even tried to shoot them.
This was the atmosphere prior to the Christmas truce.

About this Episode’s Guest Terri Crocker

Terri Blom Crocker is the Senior Paralegal for the Faculty, Students, and Research Group in the Office of Legal Counsel at the University of Kentucky. She has more than thirty years of experience in private practice, state government and the university environment.