Fellow crisis communicator Jeff Worden joins Tim to talk about one of the worst crises NASA ever faced when the space shuttle Challenger came apart in midair shortly after launch in front of millions. 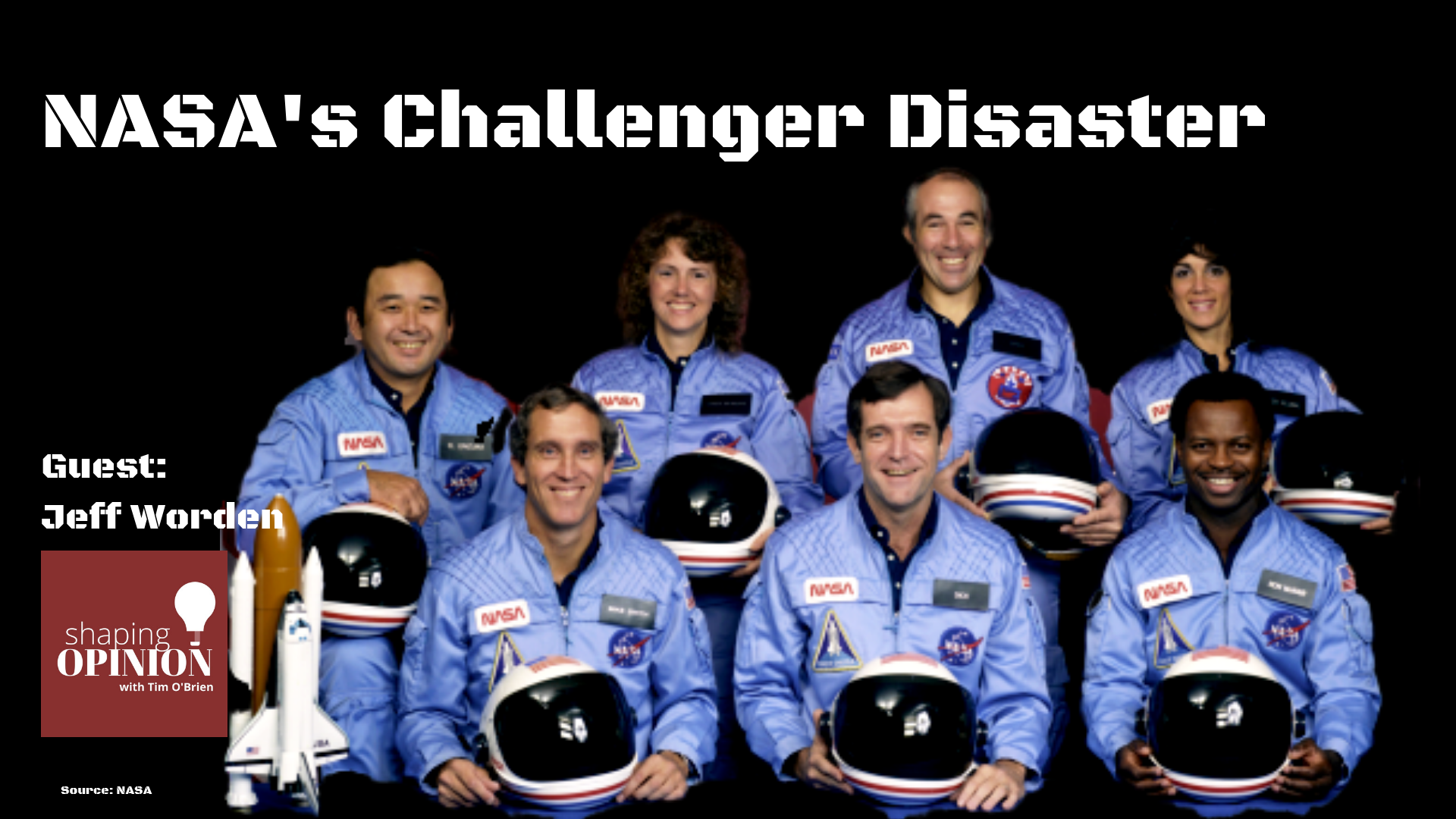 In this episode, we talk with Jeff about the tragic events around January 28, 1986. That was supposed to be a day of celebration but turned to tragedy when the Space Shuttle Challenger’s booster rockets exploded shortly after launch.  That event marked a turning point for the way we see space travel.

The NASA space shuttle Challenger came apart in the air 73 seconds after launch on that sunny day in January.

The tragedy took the lives of all seven astronauts on board, which included Crista McAuliffe, a teacher from New Hampshire who had won the honor of be the first civilian in space.

The event shocked the nation and the world, and was arguably the worst crisis NASA had ever faced to that time.

Confidence in America’s leadership in space was shaken.

Later, it was found that two rubber O-rings were the problem. They had been designed to separate the sections of the rocket booster on liftoff, but they failed due to cold temperatures on the morning of the launch.

After that tragedy, NASA had to temporarily suspend all shuttle missions.

The mission had already been delayed 6 days for weather and technical problems. That morning was very cold. We would later learn that engineers warned their supervisors that certain components, including the rubber O-rings that sealed the joints of the shuttle’s rocket boosters – could fail at low temperatures. The warnings were ignored.

The Challenger did not explode.  NASA public affairs officer Steve Nesbitt said at the time that “We have a report from the flight dynamics officer that the vehicle has exploded.”

It wasn’t that simple. The external fuel tank collapsed, releasing all of its flammable contents. They ignited to create a huge fireball in the air. The shuttle itself was still intact and still rising.

The truth is, it was trying to stay on its path but it broke off of the tank, and it was moving so fast, it couldn’t tolerate the aerodynamic forces. The tail and main engine section broke off. Both of the wings broke off.

The crew cabin and the forward fuselage separated from the payload bay and they broke up when the fell from the sky into the water. The crew did not die instantly. Experts believe the astronauts were alive until their crew cabin hit the Atlantic Ocean at 200 miles per hour.

The National Air and Space Museum has said that the astronauts were still strapped into their seats when they were found.

Still, it’s hard to know if they were conscious when things went awry.

While millions did see the tragedy on TV, most did not see it live. The major TV networks did not air the launch live.

It occurred on a Tuesday at 11:30 a.m., Eastern Time. Most people were at work or going about their daily routines.  The people who saw it live were those watching the NASA channel on satellite dishes (new at the time and rare), and the people who may have been watching CNN.

How it Changed NASA

When NASA launched the Shuttle Program, it framed it as a way to make space travel more affordable and routine. They even said we’d see more than 50 flights a year.

The nation started to get bored with space flight. It was becoming routing, not only for the public, but perhaps for NASA.

While many factors contributed to launch failure, this attitude could have been a contributor.

Space flight was suspended to 2 years.

The Rogers Commission conducted an investigation at the behest of President Reagan. Members of the commission included Neil Armstrong and former test pilot Chuck Yeager, along with Sally Ride, the first American woman in space.

The commission found that the O-ring seal was at the center of the problem.  They also found that Morton Thiokol, the company that designed the solid rocket boosters, had ignored those safety warnings.  NASA managers were equally to blame.

Every last technical piece was re-analyzed. But the failed mission did not derail the Space Shuttle program, and Ronald Reagan alluded to as much on the very evening of the tragedy in his words to America and the world.

The Space Shuttle program resumed in September 1988 with the launch of Discovery.

Many important missions, including the repair and maintenance of the Hubble Space Telescope, and the construction of the International Space Station.

February 1, 2003, another shuttle disaster claimed the lives of the seven-member crew shortly after the shuttle Columbia disintegrated upon reentry.

The shuttle program ended in 2011.

On the evening of the Challenger launch, President Reagan was scheduled to give his State of the Union Address, which is always carried on all major networks.

But the president decided not to give that speech, given the day’s events.

He and his team knew that the only subject on everyone’s mind was the Challenger and its crew, and questions about space travel, NASA and America’s leadership position.

Reagan saw the disaster as it was re-played on the news.

He had been rehearsing for his State of the Union Address.

Another issue here was that because Christa McAuliffe was a teacher, schools across the country had made special arrangements for their students to watch the launch.

Reagan knew he had to face the TV cameras and talk about the tragedy.  He even said that for the kids, he had to “make it plain to them that life does go on and you don’t back up and quit some worthwhile endeavor because of tragedy.”

They tapped Peggy Noonan to write Reagan’s speech. She was known for her skill at dealing with emotion in the speeches she wrote.

Less than Six Hours after the explosion, President Reagan spoke to the nation at 5 p.m.

Noonan said she found that ending language in a poem from John Gillespie Magee who wrote  a poem called High Flight. Magee was an airman who died himself at 19 in a mid-air collision during World War II.

Noonan had learned the poem in 7th grade and remembered it. She didn’t know that the president knew the poem as well.  “Oh! I have slipped the surly bonds of earth, and I danced the skies on laughter-silvered wings.”

Noonan said the quick turnaround time was one reason it did so well. Less time for committees to change it or water it down.

About this Episode’s Guest Jeff Worden

A former reporter and editor for two Pulitzer Prize-winning newspapers, Jeff Worden, APR, has been a public relations executive for Fortune 500 companies in the financial services and manufacturing industries. He has served as corporate spokesperson, head of crisis communications and chief speech writer and communications counsel to CEOs and CFOs.

Before entering public relations, Worden was a journalist for 15 years, including two years at Today newspaper in Cocoa, Fla., which is south of the Kennedy Space Center and part of the Space Coast.