The American Flag: A Biography

Historian, professor, and podcaster Greg Jackson joins Tim to discuss the story of the United States flag, its history, its meaning and what it represents, and just why and how it stirs such strong emotions throughout society. Later in the episode we have a special feature you won’t want to miss. 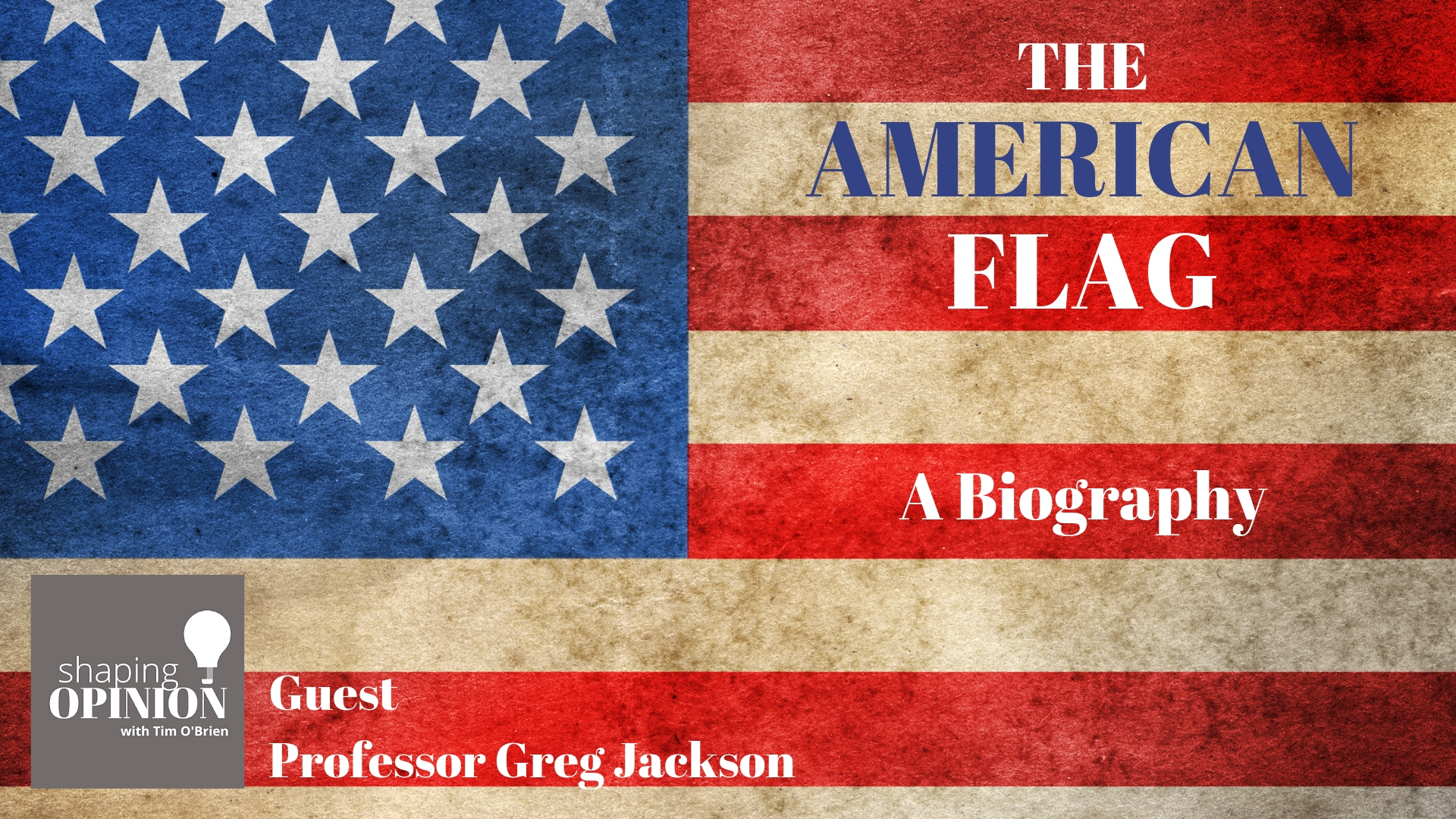 On June 14, 1777, the Continental Congress established an official flag for the United States.

The official resolution stated: “Resolved, that the flag of the United States be thirteen stripes, alternate red and white; that the union be thirteen stars, white in a blue field, representing a new constellation.”

Since that time, it has been a banner used to rally troops in battle, show patriotic support in both war and peace time, and at times it has been at the center of controversy. It’s been draped over the caskets of presidents and fallen soldiers, some we know and some that are still unknown.

As the flag was raised on Iwo Jima and in the ruins of the World Trade Center, our hopes were raised with it.
In this episode, we tell the story of the American flag.

The origin of the first American flag is unknown. Some historians believe it was designed by New Jersey Congressman Francis Hopkinson and sewn by Philadelphia seamstress Betsy Ross.

The Betsy Ross story was brought to public attention in 1870 by her grandson, William Canby, in a speech he made to the Historical Society of Pennsylvania. Canby and other members of Betsy’s family signed sworn affidavits stating that they heard the story of the making of the first flag from Betsy herself.

Despite the absence of written records to prove the story, there are several reasons why historians believe it could be so: George Ross, a member of the Flag committee, was the uncle of Betsy’s late husband, John. This could be one reason why Betsy was chosen to make the first flag. Since making the flag was an act of treason, it is significant that these men would know of her allegiance to the Revolutionary cause.

The colors of the flag are symbolic as well; red symbolizes hardiness and valor, white symbolizes purity and innocence, and blue represents vigilance, perseverance and justice.

It wasn’t until the Third Flag Act of 1818 that the country decided to stick with 13 stripes—one for each colony—and a star for each state.

“The Star-Spangled Banner” becomes the national anthem of the United States in 1931.

The anthem’s history began the morning of September 14, 1814, when an attorney and amateur poet named Francis Scott Key watched U.S. soldiers—who were under bombardment from British naval forces during the War of 1812—raise a large American flag over Fort McHenry in Baltimore, Maryland.

A lawyer from Baltimore who practiced law in Washington, D.C., Francis Scott Key watched the bombardment of Fort McHenry from a ship anchored in Baltimore’s harbor.

Key was working to negotiate the release of an American civilian, Dr. William Beanes, who had been captured in an earlier battle. As a condition of the release, the British ordered the Americans not to return to shore during the attack on Baltimore.

Francis Scott Key wrote “The Star Spangled Banner” and its initial verse on the back side of a letter while watching the large American flag waving over the fort that morning.

When he got back to Baltimore, he worked on his piece until he had completed four verses, even though most of us only know one of them today.

A local printer printed the song, originally called “Defence of Fort M’Henry,” and two Baltimore newspapers printed it. After that, it spread quickly to various cities along the East Coast.

The Flag in the Civil War

By the time the Civil War in America broke out, the United States flag had 33 stars representing the 33 states in the Union at the start of the war. The Fort Sumter Flag had 33 stars.

The Flag Becomes an Icon

In 1909, Robert Peary placed an American flag, sewn by his wife, at the North Pole. He also left pieces of another flag along the way. It is the only time a person has been honored for cutting the flag.

In July 1969, the American flag was planted on the Moon by Neil Armstrong and Buzz Aldrin. Flags were placed on the lunar surface on each of six manned landings during the Apollo program.
Raising a flag on the lunar surface was a symbolic gesture — an expression of triumph similar to the planting of a flag on Mount Everest or at the North and South Poles.

During the intense Battle for Iwo Jima in 1945, U.S. Marines from the 3rd Platoon, E Company, 2nd Battalion, 28th Regiment of the 5th Division took the crest of Mount Suribachi, the island’s highest peak and most strategic position, and raise the U.S. flag.

Marine photographer Louis Lowery was with them and recorded the event. American soldiers on the island cheered the raising of the flag, and several hours later more Marines headed up to the crest with a larger flag.

Associated Press photographer Joe Rosenthal met them along the way and recorded the raising of the second flag along with a Marine still photographer and a motion-picture cameraman.

Rosenthal took three photographs atop Suribachi. The first, which showed five Marines and one Navy corpsman struggling to hoist the heavy flag pole, became the most reproduced photograph in history and won him a Pulitzer Prize.

It is believed that the flag was hanging on the pole of a yacht in a marina just west of Manhattan the morning of the World Trade Center attacks. After the attacks, firefighters George Johnson, Billy Eisengrein and Dan McWilliams found it and then raised it above the ruins of the collapsed buildings.

A New Jersey newspaper photographer named Thomas Franklin took the shot of the firefighters as they raised the flag. It was lost for 15 years but eventually found in the state of Washington.

In 1984, when the Republican Party convened in Dallas for their national convention there were protests. Gregory Lee Johnson was one of those protestors. When the group got to Dallas City Hall, Johnson soaked an American flag with kerosene and set it on fire.

Johnson was charged with violating a Texas law that prohibited the desecration of a “venerable object.” 47 other states also had laws on the books against flag desecration.

Johnson appealed his conviction and his case eventually went to the Supreme Court. Johnson argued that the Texas flag desecration statute violated the First Amendment. Justice Antonin Scalia was in the majority on this.

Our thanks to Steve Garrett of the Within the Realm Podcast, Jeremy Collins of Podcasts We Listen To, and John Chamberlin and Rachael Rennebeck of the Pittsburgh podcast called YaJagoff for their readings of excerpts from  Johnny Cash’s, “Ragged Old Flag.” And to the Johnny Cash museum.

About this Episode’s Guest Greg Jackson 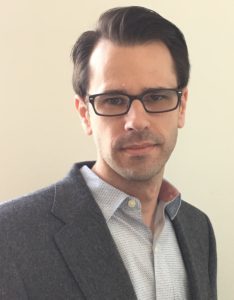 Born and bred in Southern California, Greg now calls Utah home and is a professor at Utah Valley University (UVU). He holds a Ph.D. in history from the University of Utah, where he was also a Burton Scholar. Previous to that, he earned an M.A. in French Studies and a B.A. in history from Brigham Young University. He’s also taught a range of history classes (US, European, World, and Middle Eastern) at a few universities (the University of Utah, Westminster College in Salt Lake City, and now UVU).

When Greg isn’t researching, teaching, or podcasting, he’s usually with his family, cycling, rock climbing, or indulging his love of languages. Greg speaks fluent French, rusty-but-conversational Spanish, and has some working ability in Arabic and Classical Latin.