Yes, Virginia, there is a Santa Claus

Jim Temple is the grandson of Virginia O’Hanlon, who wrote a letter to the New York Sun that would lead to an editorial that would cement Santa Claus in the minds of children of all ages for generations.  Jim joins Tim in this episode to talk about the lasting impact of that letter and the editorial. This is that now iconic editorial that features those legendary words, “Yes, Virginia, there is a Santa Claus.”

The year was 1897, and an eight-year-old Virginia O’Hanlon had something on her mind. Her friends were telling her that there was no such thing as a Santa Claus. No jolly old elf in a red suit. No eight tiny reindeer.

Being one not to take what she heard on face value, young Virginia decided to do her own investigation, so she wrote a letter to the New York Sun.

On September 21st, 1897, the New York Sun published its response in the form of an editorial that is not regarded as the most famous editorial in the history of American journalism, starting with one of its most famous lines.

The author of the editorial was a former Civil War reporter named Francis P. Church. Though he had no children of his own, his editorial is said to have captured the innocent essence of childhood and blending it with complete non-condescending honesty. He wrote the truth yet never spoiled the magic of Christmas for Virginia, and for that matter, millions of boys and girls who would follow in the generations to come.

This episode’s guest, Jim Temple, is the grandson of Virginia O’Hanlon, the once little girl who started it all and went on to a career as a school teacher in New York City. 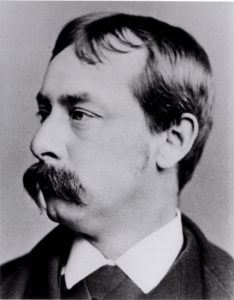 It has been said that after all of the violence he witnessed covering the Civil War, he was left cynical and reticent.

The editorial page editor at the New York Sun at this time was Edward P. Mitchell. He would later say that Francis P. Church, “bristled and pooh-poohed at the subject when I suggested he write a reply to Virginia O’Hanlon; but he took the letter and turned with an air of resignation to his desk.”

The headline may have made all the difference: “Is there a Santa Claus?”

I am 8 years old. Some of my little friends say there is no Santa Claus. Papa says, ‘If you see it in The Sun, it’s so.’ Please tell me the truth, is there a Santa Claus?

“Virginia, your little friends are wrong. They have been affected by the skepticism of a skeptical age. They do not believe except they see. They think that nothing can be which is not comprehensible by their little minds. All minds, Virginia, whether they be men’s or children’s, are little. In this great universe of ours, man is a mere insect, an ant, in his intellect as compared with the boundless world about him, as measured by the intelligence capable of grasping the whole of truth and knowledge.

Yes, Virginia, there is a Santa Claus. He exists as certainly as love and generosity and devotion exist, and you know that they abound and give to your life its highest beauty and joy. Alas! how dreary would be the world if there were no Santa Claus! It would be as dreary as if there were no Virginias. There would be no childlike faith then, no poetry, no romance to make tolerable this existence….”

Please give their podcasts a listen!