In this episode, Tim revisits the Top 10 moments in the Shaping Opinion Podcast for 2019. Which one was your favorite? Find out if your fellow listeners selected it in their Top 10! 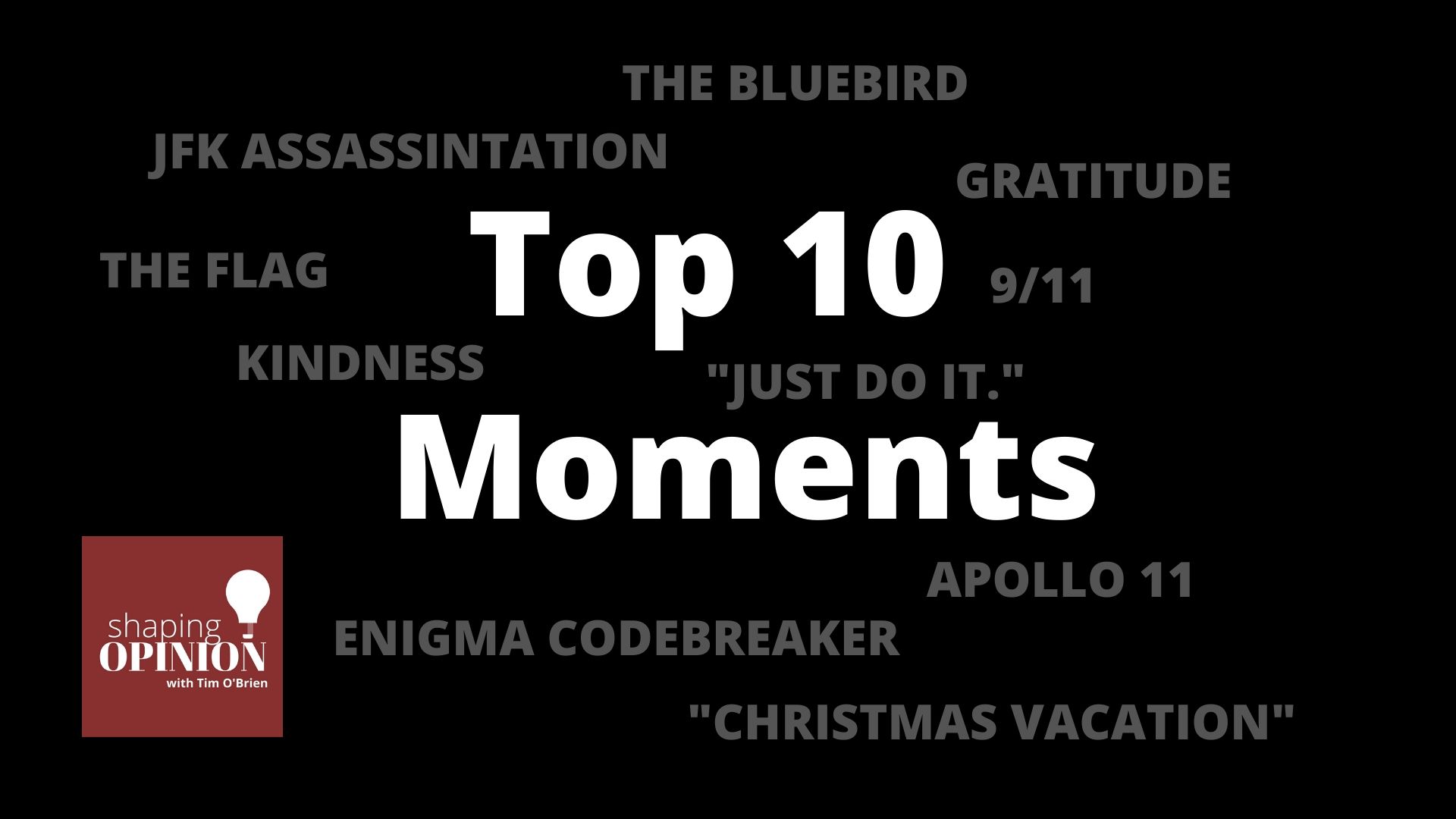 If 2018 was the year we created a podcast, 2019 was the year we started to build a community, and we thank you for that. Please know how much we appreciate you for listening, sharing and talking about with your friends and with us.

Some others we’d like to thank. A big shout out to all of our guests who make the Shaping Opinion podcast.

Since we’ve started, we’ve had the chance to talk to people who were experts on history, and others who watched history being made, and still others who had a hand, in some way, in history as it happened. And while history is an important part of every episode, there are some subtle and other not so subtle ingredients in our recipe – one is communication. In every episode, communications plays an important role. And in every episode, the people, events or things we’ve talked about somehow had an influence on our society or culture.

We’ve decided to follow a countdown format, so, number 10 on our list of Top Ten moments in 2019 came from Episode 57, where we talked to author and historian, Rod Pyle, about the historic Apollo 11 mission. We selected this moment because of the historic significance of Apollos 11’s 50th anniversary this year, and Rod’s excellent description of just how hairy the landing on the moon actually was…

Number 9 on our countdown is from Episode 97, where we talked to the director of National Lampoon’s Christmas Vacation movie. Jeremiah Chechik had fond memories of the making of the movie, but the moment that stood out for me was when he described the creative process that helped create a Christmas Classic.

Number 8 on our countdown is from Episode 96. That’s where we talked to our podcasting friend Steve Garrett about how it’s taken time, but after a tragic loss, he’s been able to celebrate the Thanksgiving Holiday with a real, deep-down gratitude.

Number 7 on our countdown is from Episode 77, where we talked to 97-years young Julia Parsons who is one of the few people who can say they were a codebreaker in World War Two. Julia used one of the world’s first computers, the Bombe machine developed by Allan Turing, to decipher coded messages from German submarines during the Second World War.

Number 6 on our countdown is from Episode 49. That’s where we talked to Liz Dolan, who was named head of PR for Nike at the time the company launched its “Just Do It” marketing campaign. Liz would later become head of all marketing for Nike and had some thoughts on just why the Nike tagline has become probably the most famous advertising line in history.

Number 5 on the countdown is from Episode 81. In that episode we interviewed Erika Wollam Nichols of Nashville’s Bluebird Café. While you may not know the Bluebird by name, you are familiar with its impact on American music. Taylor Swift, Garth Brooks are just two of the many singer-songwriters who were discovered there. And in the near future, a new documentary on the Bluebird will hit movie screens across the country. We sat down and talked about what makes the small little storefront so special.

Number 4 on our countdown is from Episode 52. That’s where we spoke to a forensic pathologist who has been part of history. Dr. Cyril Wecht was the first forensic pathologist to have access in 1964 to much of the files and materials related to the JFK assassination. Ever since, he’s studied the event that changed history and has his own theories on who did it and what happened.

3 – In Search of Kindness

Number 3 on our countdown is Episode 75, where we had the chance to sit down with Mary Latham. She’s been on a one-of-a-kind trek to all 50 of the United States in search of stories of kindness. It all started when she lost her own mother to cancer, and something her mother had said to her inspired Mary to hit the road. In the end, she’s hoping to take all of the stories of the good in the world and use them to help others dealing with their own challenges in life.

Number two on our countdown is Episode 73, where we told the story of the American Flag with Professor Greg Jackson of the History that Doesn’t Suck Podcast. Near the end of that episode, we thought we’d take some inspiration from the words of a Johnny Cash song called Ragged Old Flag.

Number one on our 2019 countdown of top episodes is the one we called “A Pentagon Story,” which was Episode 85. In that episode, we interviewed retired Captain Bill Toti, who was in the U.S. Navy and stationed at the Pentagon on September 11th, 2001. This quickly became the most listened to episode in our 100-episode history. Bill’s story of tragedy, heroics by many, and of the human experience resonated with everyone who listened.